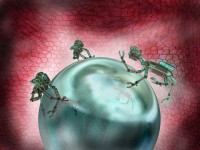 The effects of rapid technological advancement

I read an article on the Next Big Future about nanobots currently being used to treat a terminally ill leukemia patient.  Without the DNA nanobot treatment, the patient would only be expected to live until the summer of 2015.  If the treatment goes as expected and the animal trials are any indication, the cancer is expected to be eradicated within one month.

A nanobot is a nanoscale robot that is programmable on a molecular level to perform very specific tasks.  The task can be just about anything, but in this case, DNA is a used for storing information such as how to identify targeted cancer cells and delivering the payload to kill just the cancerous cells, while having no impact on any of the healthy cells or tissues.

While I fully anticipated a day where nanobots were a reality, I did not expect that day to arrive so soon. When I wrote Nanotechnology Speeds Up Product Development and Growth in September, 2014, I outlined the four stages of anticipated nanotechnology growth. Nanobots was Stage 4 – the last stage. I was not anticipating the experts to reach this stage for at least a few more years, but here we are, only six months down the road and preparing to treat a terminally ill cancer patent with actual nanobots.

A paradigm shift in cancer and other medical therapies

If this experiment on the leukemia patient is successful it will represent another paradigm shift in the treatment of cancer. Professor Ido Bachelet has indicated that his nanobots can currently recognize 12 different cancer tumors.

The nanobot therapy, if successful, will be unlike any current cancer therapies, which are often painful and just as damaging to the body as the cancer itself. Nanobot therapy will cause virtually no damage to healthy tissues. The nanobot will be programmed to target or interact on a cellular scale and to recognize target cancer cells. The targeted cancer cells are the only ones capable of opening the nanobots that are carrying the treatment payload of medicines.

Treating cancer is only one of many applications that can be addressed with nanobots.  One future application I am excited about will include spinal cord repair. Nanobots will deliver insulin to tell cells to grow and regenerate tissue a the desired location.

As with all major paradigm shifts, this technology has huge societal implications. More and more people will be living longer than currently anticipated, which will push our leaders to consider how to deal with these rapid changes and developments. Common sense should indicate that scientists will need to get more involved in seeking political office because we will need leaders who can grasp the science and the potential changes new technologies and science represent to society. How will people living so much longer impact Social Security benefits? Will this technology be available to all and covered by our universal health care or will it only be available the rich and affluent? These are just a couple of thousands of questions that will need to be addressed as this technology advances.