Many start-up businesses look to outsource their manufacturing beyond the borders of the U.S. as a way to save money.  It is true that cheap labor typically offers a lower unit cost and potentially higher profits for you and lower retail cost for your clients. But there are some very real issues of which a a start-up business must be aware.

Rising fuel costs.  Most of our current clients are now beginning to explore the costs of manufacturing their products in the U.S.  Or, at the very least, looking to bring the manufacturing closer to home by looking at Mexico. It is more important than ever to do a cost analysis on whether having your products made in the overseas markets offsets the rising shipping costs.

Control over the manufacturer.  Ask yourself one simple but important question: what recourse do you have if the product you manufacture overseas turns out to be defective once it arrives in the U.S. for distribution?  If you think product liability or product recall insurance is going to cover this, you are wrong.

A past client of mine put together a team of highly successful entrepreneurs to develop and sell a new toy. Like most entrepreneurs he wanted to produce the product for the lowest possible cost to maximize his profits. As logic would have it, it was cheaper to have the product manufactured overseas.

He invested thousands of dollars and conducted many independent marketing tests. Everybody, including myself, was excited about this next big hit. But when the toy arrived in the U.S. it was found to be defective and dangerous to the user.

Apparently, some contamination leaked into the plastic during the molding process. Every unit was deemed unsafe and had to be returned to the manufacturer for replacement. The principles knew they were screwed and essentially disbanded the company, which went out of business. They couldn’t not force the manufacturer to replace the product, and a replacement could take years instead of weeks or months. Thousands of dollars and countless hours of work down the drain.

The moral of this story

Unfortunately, the overseas manufacturer decided to take back the defective product that they knew was potentially dangerous and sell it to unsuspecting vendors at a discount to make money. How do we know this? We were contacted by two vendors looking for product liability insurance on the exact same product. Of course we could not help them. 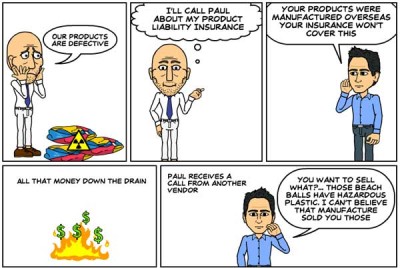