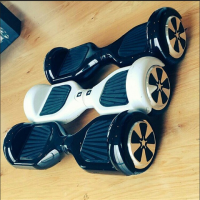 Hoverboards are one of the 2015 holiday season’s most sought after gifts. And Amazon, one of the world’s largest retailers, is playing the part of the Grinch.

Amazon is pulling many models from its U.S. and U.K. websites for safety reasons.

A safety page on Amazon’s website states that impact, overcharging or significant changes in temperature can cause problems. It specifies that the lithium batteries installed in the self-balancing scooters can overheat, catch fire, or explode.

Overstock.com also announced it stopped selling the devices on its site. The Overstock press release stated, “With the continued emergence of news reports highlighting safety concerns with ‘hoverboard’ self-balancing electric scooters, we have made the decision to remove all similar products from our website as a precautionary measure.”

According to Swagway, the leading manufacturer of hoverboards, Amazon now requests proof from manufacturers that their devices are safe. Swagway and other makers of hoverboards have had some or all their products removed from the retailer’s website.

Safety in the air

According to Delta, the strength of the lithium batteries often exceeded government limits for what’s allowed aboard an aircraft. Delta acknowledged that instances of battery combustion are rare, but that the risk of spontaneous overheating is a fire hazard.” Delta found that the manufacturers are not providing consistent details regarding the size or power of the lithium-ion batteries installed in their devices.

The U.S. Consumer Product Safety Commission is investigating the safety of hoverboards. The agency is specifically looking into injuries from falls and reports of spontaneously bursting into flames, videos of which filled social media sites.

Unfortunately, many injured consumers of hoverboards may be quite disappointed when they try to recover their losses by filing a product liability lawsuit. Many of the kiosk retailers that sell hoverboards do not carry Product Liability Insurance. They might not even be around by the time the claim is filed. Kiosk retailers are not typical retailers that sell products 12 months of the year. Many of them are only looking to sell the hoverboards for two or three months to take advantage of the holiday sales. In fact, they typically cancel any insurance they may have had after the holidays or simply discontinue their business.