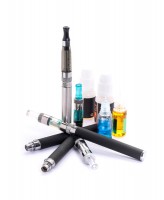 Electronic cigarettes are supposed to be a safe smoking product and many applaud their use for those who want to quit smoking tobacco. But not everyone is a fan of the e-cig. Plenty of people protest that the “healthier alternative” to traditional cigarettes is all smoke and mirrors.

Jennifer Cox is protesting loudly. She recently filed a class-action lawsuit in a U.S. District Court in California alleging that the manufacturer, distributors and sellers of Cuttwood e-liquids were in violation of state consumer protection laws. She and the other plaintiffs claim that Cuttwood, its founder Jared Unger, Molecule Labs, its president Michael Guasch, and several others did not disclose that toxins were contained in their e-liquids.

The irreversible disease was first seen back in 2000 in factory workers exposed to the substance in plants where microwave popcorn was manufactured. DA is used to make artificial butter flavoring. Neither of the two substances are hazardous to eat or drink.

Cox’s lawsuit claims that multiple methods were used in deceiving and misleading consumers. The plaintiffs are seeking to prove that certain e-liquids manufactured by the defendants have “the highest concentrations of DA and AP seen in any liquid nicotine product on the market.” The suit also claims that customers are not warned about the dangers of inhaling the toxins either on the packaging or the product website.

Effect on the e-cig industry

The outcome of this lawsuit could be good or bad for the e-cig industry.

The burden of proof will fall on the plaintiff to prove e-cigs are detrimental to health. If the plaintiff fails to prove that, the publicity could be used by the e-cig industry as positive proof that e-cigs are a much better alternative than tobacco.

What’s not being said

The DA ingredient is typically excluded on most e-liquid Product Liability Policies and therefore will not be covered. Most manufacturers choose to use propelyne glycol or vegetable glycerine rather than DA. Only a few of the manufacturers have chosen DA because they believe the taste is superior.

E-liquid manufacturers should make sure that e-liquids are specifically addressed in their Product Liability policy. It has come to my attention that many e-liquid and e-cig Product Liability policies remain silent on the e-liquid coverage. This should be very disconcerting for e-liquid manufacturers because all of their Product Liability Policies come with a Tobacco Exclusion.  And since Nicotine is defined by the FDA as “tobacco,” there may be a lack of coverage, unless there is an endorsement that specifically addresses e-liquids as a covered product.

If you want further information on the subject or would like a quote for product liability insurance, contact us or call Paul Owens at (800) 622-7370.